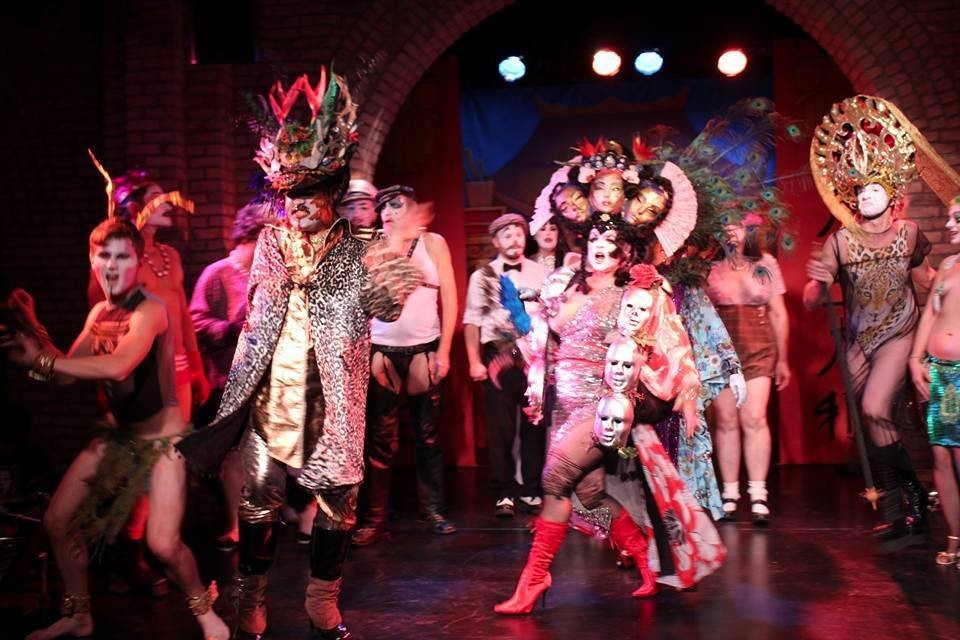 Night of a Thousand Gin-Sling's - Part 2

Fast forward to 2008 when The Thrillpeddlers, a San Francisco Grand Guignol theatre troupe that Scrumbly Koldewyn, Fayette and I were now attached to under the direction of Russell Blackwood were invited to revive Pearls at the HOWL Festival in New York City for three performances, the first being rained out in Tompkins Square Park, the others at the Bleecker Street Theaters. Who knew that I would have the opportunity to recreate my original role some thirty-eight years later!

In 2009 Pearls opened at the Hypnodrome an intimate forty seat theater South of Market and ran for a record breaking twenty-two months. The opus attracted many celebrities including Penny Arcade, John Waters, The Manhattan Transfer, Senator Mark Leno, and Denise Hale. I was fortunate to have a gaggle of understudies: Kim Larsen, Valentine, Arturo Galster, Laura LeBleu, and eventually Birdie Bob Watt to step into my six inch stilettos allowing me to continue touring and make the occasional appearance in independent films including The Glitter Emergency and Uncle Bob. Pearls was revived yet again for an additional 4 month run in 2014 with new costumes, sets, additional music by Scrumbly, and Sweet Pam joining the cast as Mrs. Goldberg originally played by Goldie Glitters.

Original Cockettes Tahara and Bill Bowers were instrumental in providing costumes and sets for the long run.

While in residence, I took over the reigns of the Blue Hour a variety show of sorts which followed the performance of Pearls, booking everything from the Lady With Three Legs to the US debut of French dancer, choreographer Francois Chaignaud giving a multitude of performers an opportunity to shine.

At one point during a fight scene in Pearls I was directed to shoot a pistol with blanks into the air to stop the fight. I hadn't held an actual gun since they shoved one up my ass in Elevator Girls in Bondage, but being the big sissy that I am after trying to handle the firearm delegated the responsibility to someone else. An additional highlight happened upon turning my back on the audience screaming "NOOOOooooooOooO!" and collapsing into a dead faint, not liking the sound of my own scream we placed Kara Emry behind the scrim to provide the sound effect.

The experience and discipline of appearing in such a long run was fun and exhausting and I wouldn't have traded it for anything. The closest I ever came to repeating a role so often was way back in 1972 when Hibiscus cast me as the Gypsy Maiden who lured the Gypsy King away from the Gypsy Queen, portrayed by the legendary Marsha P. Johnson in the Angels of Lights musical the Enchanted Miracle for two free shows a night for the entire month of December never missing one of sixty performances.

Two other companies have since revised Pearls in New Orleans, and Minneapolis Minnesota.‍